We at Montesquieu Winery believe in equal opportunity at the wine table. We’ll taste — and, if warranted, fall in love with — wine from any region, not just those with centuries of pedigree. Even so, we do have a few favorites, regions that rarely fail to thrill and intrigue, and keep you coming back again and again. Near the top of that list? The Northern Rhone.

Why so? Putting aside the unusually high delicious factor of its wines, the Northern Rhone has a knack for romance, class and old-world luxury, all of which we’re suckers for. The famed region is situated at the center of what is the most privileged swath of vineyards in the world. At the north of this strip is Burgundy, home to the best Pinot Noir, Chardonnay and Gamay on earth. At the southernmost tip on the Mediterranean coast is Bandol, the international gold-standard for Mourvèdre, and then moving northward, Châteauneuf-du-Pape, which produces unparalleled Grenache-based wines. And nestled in between these prestigious bookends – some 30 miles south of Beaujolais and 35 miles north of the Southern Rhone – lie the legendary vineyards of the Northern Rhone.

The eight AOCs that make up the Northern Rhone – Cote Rotie, Condrieu, Chateau Grillet, St. Joseph, Crozes-Hermitage, Hermitage, Cornas and St. Péray (from north to south) – run along a 45-mile stretch of the Rhone River from Vienne to Valence, with most of the vineyards planted on the river’s stunningly steep western banks. Many of the vineyards – especially those in the Cote Rotie, Hermitage, and Condrieu – are so treacherous that machine-harvesting is literally impossible, and even the most basic of viticultural tasks involve feats of acrobatics. The views from these vineyards are dizzying, and some of the most beautiful one can find in the world of wine.

Although often lumped together under the ‘Rhone Valley’ descriptor, the Northern and Southern Rhone regions are really quite distinct. For starters, the Northern Rhone accounts for only 5% of the total wine production of the Rhone Valley. The two regions’ climate, topography and soil types are different too. In the ‘mediterranean’ South (mild winters, hot summers), the rolling terrain is marked by sandy soils and plots thick with galet stones. In the ‘continental’ North (cold winters, warm summers), the precipitous terraced vineyards boast predominantly granitic soils.

Probably the most definitive difference between the South and North, though, is that of varietal. Although white wines from both regions can use Viognier, Marsanne and Roussanne grapes (depending on the appellation), the Southern Rhone specializes in Grenache (usually blending it with minority portions of Syrah, Mourvèdre, and Cinsault), while the Northern Rhone is pure Syrah country.

Big deal, you might say. Syrah is everywhere these days. California’s opulent Central Coast Syrahs are easily found throughout the nation’s retailers. Australia’s high-octane Shiraz is a major player on the import market. Other southern wine-growing regions like South Africa, Chile, Argentina, and even Mexico have experienced some Syrah/Shiraz success recently. Even Syrah-based Port-style dessert wines are à la mode in places like Amador and El Dorado.

Not only that, a typical Northern Rhone red differs markedly from any other region’s typical Syrah. For one, in some of its appellations French vintners will sometimes blend in a little Viognier (rarely more than 5%, never exceeding 20%) to add a floral quality and an oily texture to the Syrah.

More importantly, there’s something about these wines that weds power and finesse – a highly prized commodity in the wine world. Great Northern Rhone Syrahs exhibit the deep, rich fruit that you’d expect from a region that gets lots of sun exposure; but they also possess the seductive silky texture you’d expect from a region just a little south of Burgundy. Likewise, they express the earthy, even gamey flavors typical of Rhone vines; but they are also endowed with a precise, mineral character and fine structure – all of which suggests a sort of elegant rusticity. This kind of layered, complex balance is characteristic of Northern Rhone Syrah, but it’s the exception rather than the rule among Syrah from other regions, most of which can scarcely dream of emulating the complexity and depth of a good Hermitage or Cote Rotie. (Notably, when you do find one of those rare New World Syrahs that captures this elusive quality, it’s a profound experience!) Northern Rhone virtuoso Greg Viennois is one capable of eliciting such splendor. It is our great pleasure to collaborate with him as he is wine maker for our stunning Alexander Rochette wines.

And then there are those steeply sloped plots in the Northern Rhone, some with a gradation in excess of sixty degrees. These taxing conditions make crafting wines in the Northern Rhone a meticulous and expensive process – but they also promise great rewards to winemakers committed enough to do it. Steep vineyards characterize some of the best wine regions in the world, and wines from vines on steep slopes often deliver unique flavor nuances that make them especially worth seeking out.

With all this talk of Syrah, let’s not forget those hallowed white wines that make the Northern Rhone so special – after all, it boasts two regions dedicated entirely to luxury white wine (Condrieu and Chateau Grillet) along with one of the rarest, most sought-after white wines on earth in Hermitage blanc.

Although each Northern Rhone cru is worthy of extended reflection, the following is a brief summary of the four most important and prestigious crus – Cote Rotie, Condrieu, Hermitage and Cornas – ordered from north to south: 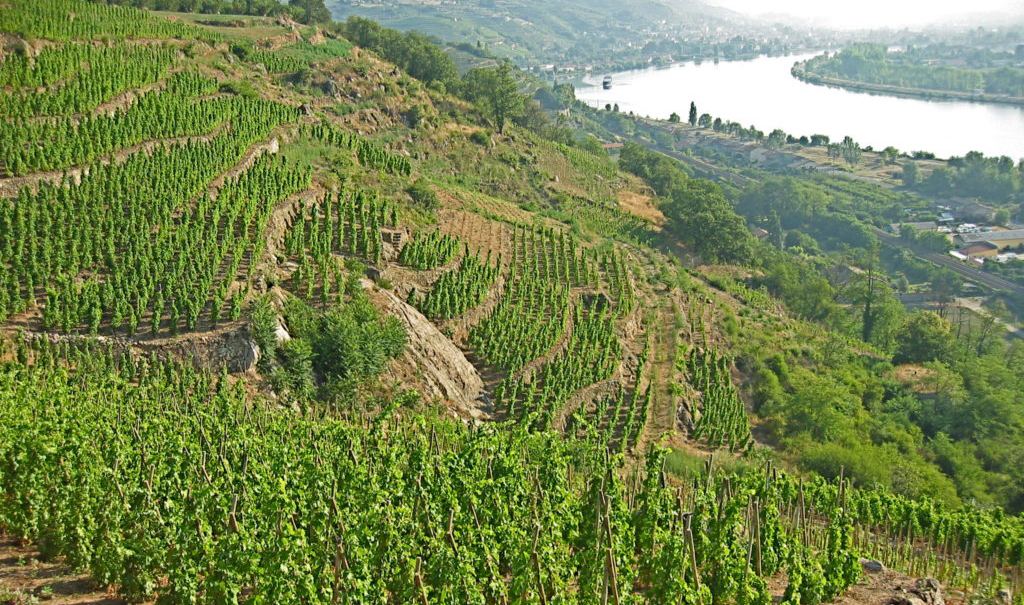 Cote Rotie – 200 hectares of vines, granite and schist soils, red wines only (Syrah with some Viognier) 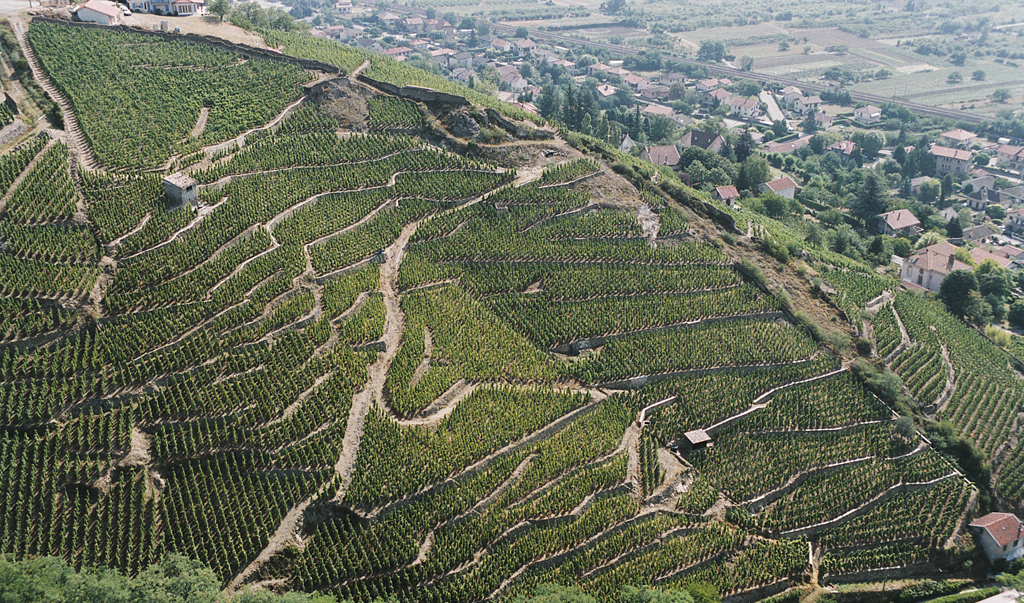 Condrieu – 240 hectares, ‘arzelle’ (a mica-rich topsoil) over granite, white wines only (Viognier only) 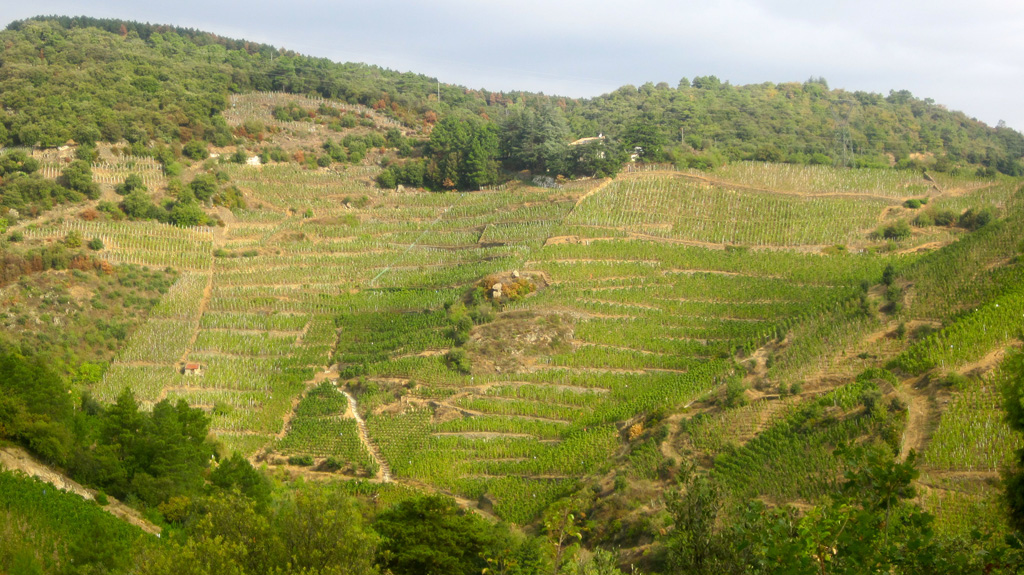