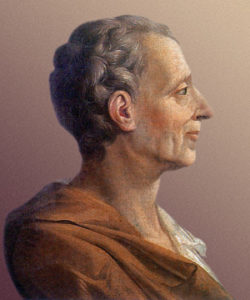 Charls-Louis de Secondat, better known as ‘the Baron of Montesquieu’, was a French philosopher, lawyer, statesman, and winemaker during the Age of Enlightenment. Born in 1689 in the Bordeaux region of France, he graduated from the University of Bordeaux in 1708 with a degree in law, although he would eventually abandon his legal practice to focus solely on writing. Montesquieu lived during a time of great political turmoil in Europe and this fact is reflected deeply in his works.

Many of his works are socio-political in nature and all of them feature Montesquieu’s personal commentary. The Baron’s most famous treatise is unquestionably The Spirit of the Laws. Often considered to be the quintessential deconstruction of modern governmental structure, this would be the most influential work for the framers of the American government, cited second only to the Bible. He was instrumental in the separation of powers, noting that the “checks and balances” provided by separating the three branches of government was the people’s insurance against a government that had grown beyond its own limits. As a champion of liberty, Montesquieu felt that “government should be set up so that no man need be afraid of another”. Challenging the authority of the monarchy and the Church with such bold proclamations would not go unpunished, and so The Spirit of the Laws was published anonymously.

Besides his musings over politics, the Baron had keen theories about weather and geography. Particularly important were his observations about how climate, soil conditions, and geography impacted the growth of wine grapes—and how they affected the finished wine. These ideas would ultimately become the modern concept of terroir, the theory that each region has unique characteristics intrinsic to it that make it one of a kind. This work helped to cement his home region of Bordeaux as the world’s premier producer of red wine. Montesquieu himself is responsible for the creation of the world’s most famous varietal – Cabernet Sauvignon. He crossed the established varietals of Sauvignon Blanc and Cabernet Franc and the result became the most dominant varietal in the world.

The world has seen few men of the stature and depth of Charles-Louis de Secondat, the Baron de Montesquieu. A Renaissance man in every sense of the word, he helped to shape our nation, provided the foundations for our protection against tyranny. For that we owe him a sincere debt of gratitude. To that we raise our glass of Cab and toast to the Man, the Myth, the Legend.. to the Baron!