Anyone who knows much about winemaking knows that the romantic stereotype of life in the vines is just that – a stereotype. Winemaking can be romantic, of course; but it can also be risky and fraught with uncertainty. After all, Mother Nature has a long history of being a fickle master. 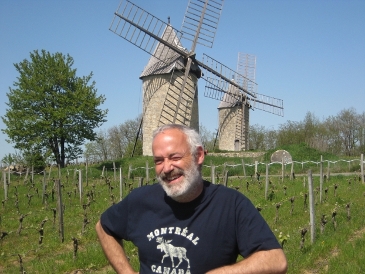 Pierre Bernault with his windmills

Consider Pierre Bernault, owner of an ancient chateau and plot of vines in Montagne Saint Emilion where he and Stéphane Derenoncourt craft Montesquieu Winery’s Moulin du Paradis blend: “You can lose an entire year’s income by surprise in the course of three weeks because of weather,” says Pierre. “But I like to take risks.”

Good thing, because in 2008, Pierre lost 66% of the year’s wine production in three minutes. A vicious hailstorm descended upon his estate without warning, destroying the majority of his fruit. Like a trained missile, the hail hit only Pierre’s property, leaving his neighbors’ adjacent vines untouched.

This penchant for risk is what caused Pierre to leave a successful career with Microsoft and buy and restore an ancient winemaking chateau in Bordeaux. It’s why he went straight to the top when assembling his team, retaining as consultant Stéphane Derenoncourt – one of the world’s greatest winemakers – who turns down ten times as many projects as he takes on. And it’s why he’s able to resist the urge to manipulate and manufacture his wines in the cellar, content to let nature be nature.

He may have taken a hit with the hailstorm of 2008, but taste the Moulin du Paradis, his blend of Merlot and Cab Franc from some of his estate’s best vines, and you know immediately that his gamble has paid off. While he lost quantity, the fruit that remained came through with immense concentration and complexity. In the end, he played the hand that nature dealt him, and he played to win.

Especially in a challenging growing season like 2008, the Moulin du Paradis is a revelation. Vibrant, pure and precise, the wine has a generous and supple core of bright red and black fruit buttressed with ripe tannins and layers of cured tobacco, flowers and exotic spices. It’s luscious and long, refreshing and complex, intense and aromatic. 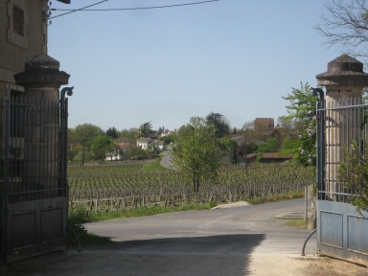 The Paradis vineyard in front of Pierre’s chateau

Pierre and Stéphane selected the best fruit from two prized parcels for this cuvée, which they crafted exclusively for Montesquieu Winery clients. The Paradis (“paradise”) vineyard is aptly named, sitting as it does right in front of the elegant gated entrance to Pierre’s small chateau.

The other parcel is a winding drive up the hill from the chateau, to the highest spot in the entire Montagne Saint Emilion appellation. This makes it one of the highest vineyards in Bordeaux. Although the 300-foot elevation of the vineyard is hardly Himalayan in height, you feel you’re at the top of the world when you’re up there. Vistas extend in most directions as far as the eye can see. “There’s Pomerol,” Pierre told us on our last visit, pointing at a distant patchwork of vineyards that makes up the famous appellation that boasts Pétrus and Lafleur among its star chateaux. Next to Pomerol we could see the rolling hills of St. Emilion, home to epic properties like Cheval Blanc and Pavie Macquin.

Of course the most distinctive visual feature of this particular vineyard is not the vistas, impressive though they are – it’s the beautiful, old windmills (“moulins”) that tower over the vines like guardian angels. These picturesque and powerful structures lend a historical gravitas to the locale and give the undeniable impression that here is someplace truly special on earth.

It’s hard to describe how exhilarating it is to visit, especially with a guide like Pierre. Up there, the wind is stiffer, the air crisper. The vineyard seems to possess an irrepressible connection with nature, as if it were an organic extension of its forested environment. You experience a sense of adventure and excitement that is sometimes lacking in many of Bordeaux’s stately, manicured vineyards. It’s the kind of thing that would intrigue a risk-taker like Pierre. 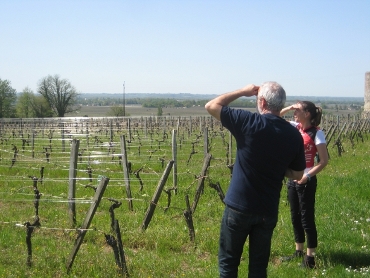 Pierre surveys the vista from his vineyard atop Montagne Saint Emilion

When you meet Pierre, though, you’re hard-pressed to find any trace of a thrill-seeker’s bravado about him. With his warm and welcoming presence, his generous laugh, and his soft, measured speech (his accented English emerges with a dash of British sophistication), Pierre is hardly a riverboat gambler. But he is full of passion for his estate and for his craft, and this energetic commitment springs forth at every turn.

During our visit, we could see his dedication to quality and history in vivid color before us. When searching for an estate to buy, he looked steadily for 18 months, visiting over 25 estates before finally deciding on this one. The chateau and cellar were built in 1851, and they were in serious disrepair (none of the buildings even had foundations!). But Pierre could see their past glory in his mind’s eye, and he set about restoring the property – modernizing the winemaking facilities while retaining their historic authenticity.

Pierre led us into the cellar’s small vinification room, showing us the vintage vats and press that he and Stephane still use for production. They’re over 80 years old, but the he refurbished the inside of the tanks so as to ensure cleanliness and quality without sacrificing historicity. Under Stéphane’s guidance, Pierre ferments each block separately, so as to draw out each parcel’s unique character and optimize the precision and distinctiveness of the ultimate blend. 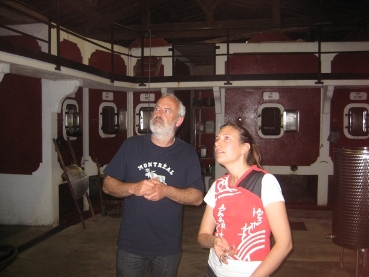 Pierre also shares Stéphane’s characteristic humility, personally and philosophically. Both men adopt a non-interventionalist approach in the cellar, allowing the terroir to speak for itself: “I am not [an] enologist,” Pierre told us. “I do not add anything to my wine. I do nothing.” This means no fining or filtration or enzymes. It also means long hours working the grapes, picking and sorting by hand. Indeed, Pierre says that “90% of my work and money is spent in the vineyards. When you’re successful in the vineyards, you have nothing to do in the cellar.”

Well, not quite nothing. Taking a “minimalist” approach that respects terroir and nature actually requires heightened levels of attention and care in the cellar. Pierre and Stéphane adapt every decision to the particular demands of each vintage, parcel and grape variety. The fermentation treatment of each tank is different, because they treat wine like a living thing – something to be listened to and cultivated, not manipulated and “made.”

The beneficiary of all this effort is the wine itself, which speaks with a clarity of origin and purpose that’s astounding, even while still maturing in oak. Our barrel sample tastings with Pierre in the cellar’s stone ageing room showed a velvety Merlot with lingering aromas of dried flowers; a silky Cab Franc full of tobacco and spice; and finally the two blended together, offering the best of both varietals. 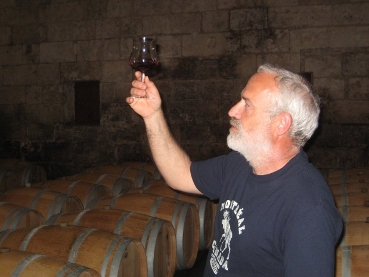 “This is the magic of blending,” said Pierre. “The whole becomes so much better than the sum of its parts – more complex, more profound.”

Pierre paused, allowing his nose to linger over his glass of Moulin du Paradis, and then turned to us with a twinkle in his eye: “I don’t know about a windmill, but you get a little piece of paradise in each taste.”