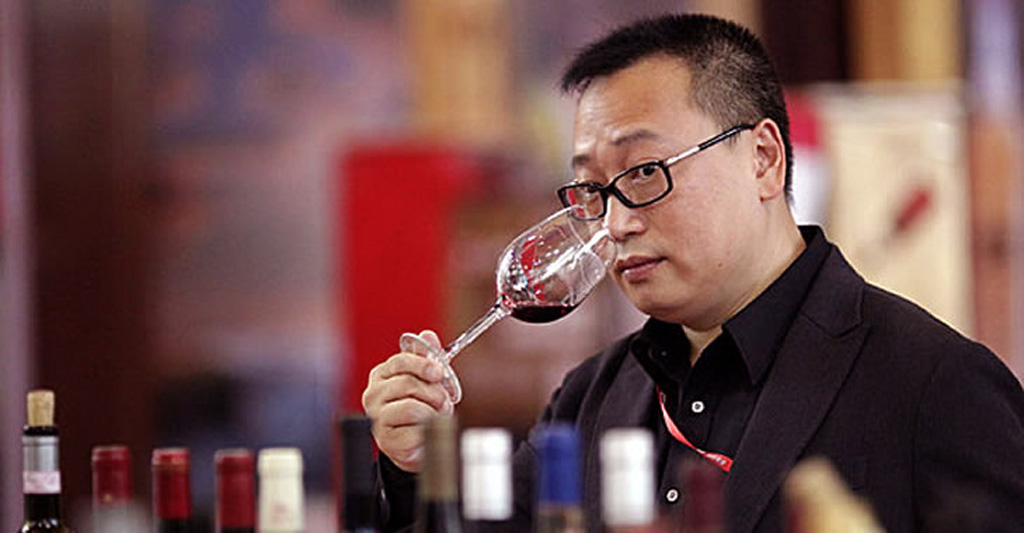 In the wine world this time of year there are plenty of lists featuring resolutions, reflections looking back, predictions looking forward and the like. Join us as we keep an eye on the following trends, which we at Montesquieu Winery feel will be especially interesting to watch in 2012.

China will continue to grow and make headlines. In 2011 China surpassed the UK in becoming the fifth largest consumer of wine in the world by volume. As wine drinkers’ tastes migrate and expand, new markets and opportunities will continue to emerge which will surely result in the popularity of a wider variety of wines and the various regions and countries they hail from. Recent studies show an increase in the number of women wine drinkers in China and that they are drinking more white wines, with white Burgundies reportedly in hot demand.

There is much being said about the “burst of the Bordeaux bubble“, citing the wealthiest Chinese not buying 1st growth Bordeaux at the previous record-breaking pace as one of the contributing factors. The frenzy seems to have shifted to Burgundy, illustrated dramatically in one case by Hong Kong Ginsberg & Chan’s sales. In July 80% of the company’s sales were Bordeaux and two months later they were 80 % Burgundy. Sotheby’s first Hong Kong auction for 2012 saw sharp declines for Bordeaux, especially the first growths, while Burgundy came in well above estimates, with star Domaine de la Romanée-Conti leading the way. 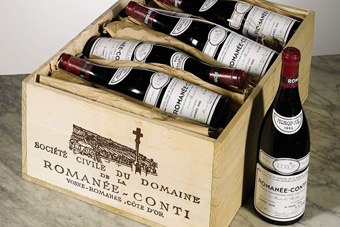 DRC The New Star of Asia

No matter the exact figure, China will continue to be a major force in the wine world due to the sheer number of wine drinkers. Consumption in China and Hong Kong grew 2.4 times larger in the five-year period from 2006 to 2010, and the figures predict a further 54.25% rise between 2011 and 2015, according to Vinexpo/IWSR projections. It will be an interesting journey to observe, as Chinese wine culture evolves and branches out. Will they share similar patterns that our U.S. market experienced as it grew? Currently the U.S. is the number one country for wine consumption worldwide by volume, with projected growth of 10% until 2015.

Napa wines will be in greater demand in China. It is only a matter of time before this trend booms. Many have speculated that retired NBA star Yao Ming, when he launched his own label Yao Family Wines last year, spurred on greater interest on by placing the spotlight on Napa Valley. The inaugural vintage of Yao Ming Napa Valley Cabernet—only available in mainland China—was released in November 2011. It seems a natural progression when tastes evolve to gravitate to this renowned region.

Additionally, Napa Valley Vintners (NVV) Executive Director Linda Reiff reported that last year was their “eighth official visit to China and Hong Kong since 1998, with vintners from 40 Napa Valley wineries, the most robust participation in this market to date.” Also, we will likely see more Chinese purchasers of Napa wineries or vineyards, following the numerous purchases already made in Bordeaux including estates in Fronsac, Entre-Deux-Mers and Lalande-de-Pomerol. Chinese film star Zhao Wei recently bought 7 hectare Chateau Monlot in St Emilion for an undisclosed price, estimated to be between 4 and 5 million Euros.

Lower-alcohol wines and Old World wines stand to gain more ground. We are hearing more and more conversations in the media about movement toward freshness and balance in wines, with less alcohol and oak. Traditionally Old World wines exhibit an emphasis on terroir, allowing the varietal to express a sense of place rather than over-manipulation in the cellar.

Sommeliers such as Rajat Parr, wine director for the Michael Mina restaurant group, have long been advocates of lower-alcohol wines as they offer wider compatibility with food as a general rule. This is especially the case with more nuanced cuisine, which may tip the scales toward Old World as palates expand and mature in regards to food and wine. 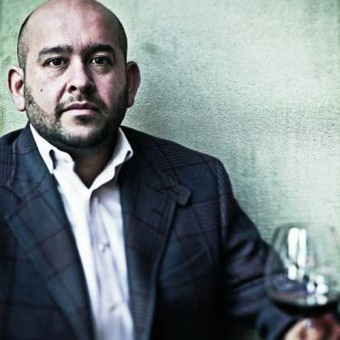 There are also plenty of producers, critics and consumers embracing a more elegant approach. For example Francis Ford Coppola, with some nostalgia kicking in, is transitioning his Niebaum-Coppola line back to the winery’s original name of Inglenook, and wanting to scale back the alcohol on his wines as well. “I want to return to elegance,” he said recently in Decanter Magazine. Stéphane Derenoncourt will be working alongside Chateau Margaux winemaker Philippe Bascaules to assist this transition. Our clients and brokers know first-hand through the wines Stéphane makes especially for Montesquieu how he masterfully elicits freshness, precision and balance to create sensual, terroir-driven wines. It will be intriguing to follow the transformation as this New World estate moves toward Old World style.

Now we’re not of the mind-set to draw lines in the sand about high or low alcohol—it is possible to make brilliantly balanced wines of either type or terribly unbalanced wines of either. However it is refreshing to hear discussions about Old World wines, tradition, and elegance in amongst all the New World coverage these days. And in many cases with higher alcohol wines, the heavy use of oak goes hand-in–hand–which masks freshness, elegance and expression of place, or terroir. A well-balanced cellar represents a wide variety of styles and regions, and these kinds of discussions in the media will hopefully inspire wine lovers to explore and expand more.

Champagne will enjoy more spotlight. New markets are opening in countries like Brazil, Russia, India and China. Pierre-Emmanuel Taittinger said recently that three years ago, “Half of the world was not drinking Champagne before, and 90% of Champagne was consumed in Europe and the US, but now China, Japan, Russia and South America are becoming a vast market.” For example, in China Champagne shipments between 2009 and 2010 rose 89% from 581,221 bottles to 1,103,763.

Established markets seek out more choices, which behooves producers to carry a range of styles. One style gaining popularity is zero dosage, with an overall trend of lowering dosage in general as producers are seeing preference for drier and fresher styles. According to Champagne market reports, Prestige cuvées are poised to make a comeback, Blanc de Blanc and Blanc de Noir popularity will increase, and single vineyard and grower Champagnes will be not only more popular with consumers, but more producers will enter the market.

The natural wine movement will increase. This movement is not going away, and really has become mainstream—think of organic food availability 10 years ago and now today. There is still much ground to cover regarding terminology, certifying agencies, etc.–organic, biodynamic, sustainable, green—all of these are still in the process of being defined, debated and researched. In 2011 there were a flurry of books published on this topic—Natural Wine, Authentic Wine, Naked Wine and Voodoo Vintners—with a range of viewpoints from zealous skeptics to equally zealous converts, and many in between. There will be big evolution in this movement, along with more growing pains, and it will be interesting to follow without a doubt.

However a very dynamic trend has been steadily gaining ground, one where producers work with charities by donating a percentage of wine sales directly to charities. This is a trend we are excited to be a part of—producers can choose causes they have a connection to and personal relationships with. As a result consumers will share in the contribution to the charity in a very direct way, and experience a deeper relationship with the producer in the process. 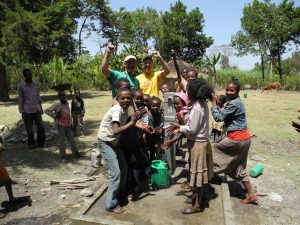 Our partnership with CNN Hero Doc Hendley and his team at Wine to Water is particularly rewarding. This dynamic non-profit provides sustainable sources for clean water to those who desperatley need it, communities around the world including Haiti, Cambodia and the Sudan. We have worked together on several fundraising events, including the release dinner for our 2007 Derenoncourt California wines where we donated a portion of the evening’s proceeds as well as a percentage of our Derenoncourt California sales. We will keep you posted on further developments, as we are getting ready to launch an exciting new project for 2012 with Wine to Water—a very innovative approach that we can’t wait to share!

Innovations and changes in wine packaging will continue. We are likely to see more wines available in alternative packaging, many of which will be marketed from a standpoint of being more sustainable. Even the traditional glass bottle has seen change, with heavier bottles being replaced by lighter ones that have less of a carbon footprint. We have seen wines in Tetra Pak, cans, aluminum bottles, bags in a box, individual pre-filled glasses, pouches, ceramic bottles, and wine on tap for restaurants delivered in kegs.
Design by Jade Jagger

As producers have tried to capture attention in the marketplace , there has also been an increase in artists hired to help promote a wine through their artwork or designs. There have been many artist series labels, a trend which began in the early 1940s with Chateau Mouton Rothschild. A recent example is the new Croix de Beaucaillou label for Chateau Ducru Beaucaillou by Mick Jagger’s daughter, Jade, a well-established jewelry designer. Fashion icon Karl Lagerfeld was commissioned by Chateau Rauzan Segla (owned by Chanel) to design a label for the 2009 vintage to commemorate the chateau’s 350th anniversary. 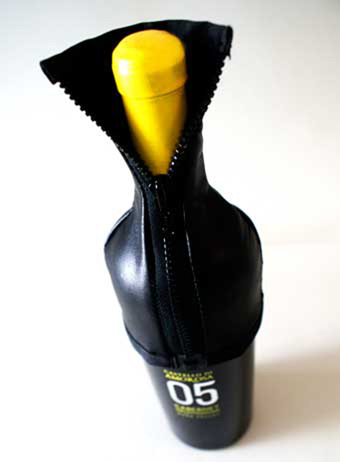 Also bottle bags and boxes by designers have made an appearance, such as a white faux leather box with metal studs by California fashion designer Denise Focil for Distilleria Bottega and a bottle-hugging zip-up cover by San Francisco based designer Aaina for Castello di Amarosa.

Some other innovative new wine packaging has included wine labels in Braille from Portugal (Chapoutier in the Rhone has done this since 1994) with a new addition—QR codes, or matrix barcodes that the consumer can scan and read detailed information using a smartphone. Then there are the new “Zork” plastic pull tab closures that don’t require an opener, and resemble plastic openers for milk or juice with a few more twirls. Screwtops are becoming more commonplace which will likely continue.

All this talk about trends and gadgets has me pining to sit down with a nice bottle of beautifully balanced wine, just me, the glass and the familiar and inviting “pop” of traditional cork—no fancy packaging, no scanning for information, just the wine and me! Trends will come and go, some will endure, but along the way we hope you savor the adventure of wine discovery, and let your palate be your guide! Cheers to a wonderful and eventful 2012!

What do you think of these trends?