The Douro Valley in Portugal is rich in history, romance and stunning scenery, and is home to one of the most distinctive wines in the wine world—Port. This fortified wine is revered for its ability to age as well as having an unequaled range of flavor and style profiles, which makes Port a valuable addition to any well-rounded wine cellar. Every wine tells a story, and the story of Port is quite unique! 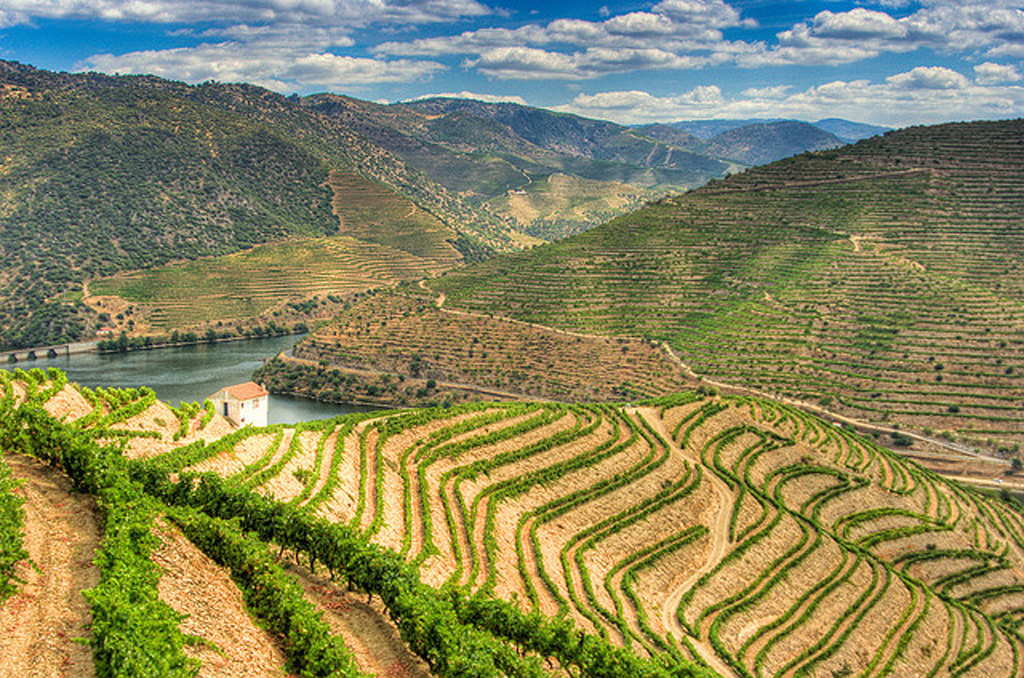 DOC Vineyards along the Douro River

The History of Douro and Port
Declared a World Heritage Site in 2001, archaeological finds date winemaking in the Douro back to Roman times. However the development of fortified Port wine occurred during the second half of the 17th century. In 1678 Britain declared war on France and blockaded French ports, and in doing so created a wine shortage in England. In 1703 Britain and Portugal signed the Methuen Treaty that established the supply of cloth from England in exchange for Port wine, among other things.

Stimulated by the increased demand and higher prices, the production picked up and British wine trade boomed in the Douro region. Port started out initially not sweet but a full-bodied dry red wine known as “blackstrap” in 17th century London. The addition of “aguardente” (a Portuguese sort of brandy) was after fermentation to the barrels in order to stabilize the wine for shipment to England.

No one knows the exact circumstances of how the fortified Port we know today was created for the first time. One story is told of a wine merchant in Liverpool who sent his sons to Portugal in 1678 to find a wine source. They reportedly found a monastery in Lamego where the abbot was adding brandy to the wine during rather than after fermentation thereby producing a sweeter port-type wine. The style took off, as the richer, sweeter style found a great following.

Many of the British wine trade established branches of their companies in Oporto, with shippers building warehouses or “Port lodges” in nearby Vila Nova de Gaia to blend, age and store the wines. Resin-lined goat skins were replaced by wooden barrels which were transported down-river on shallow wooden “barcos rabelos” sailboats. Each port lodge still owns a barco rabelo, kept for nostalgia and for the annual mid-summer Barco Rabelo race that takes place around the lively Eve of Sao Joao celebrations (Sao Joao is Saint John, the patron saint of Porto). If you are thinking of traveling to Portugal, this would be a fabulous time to visit! 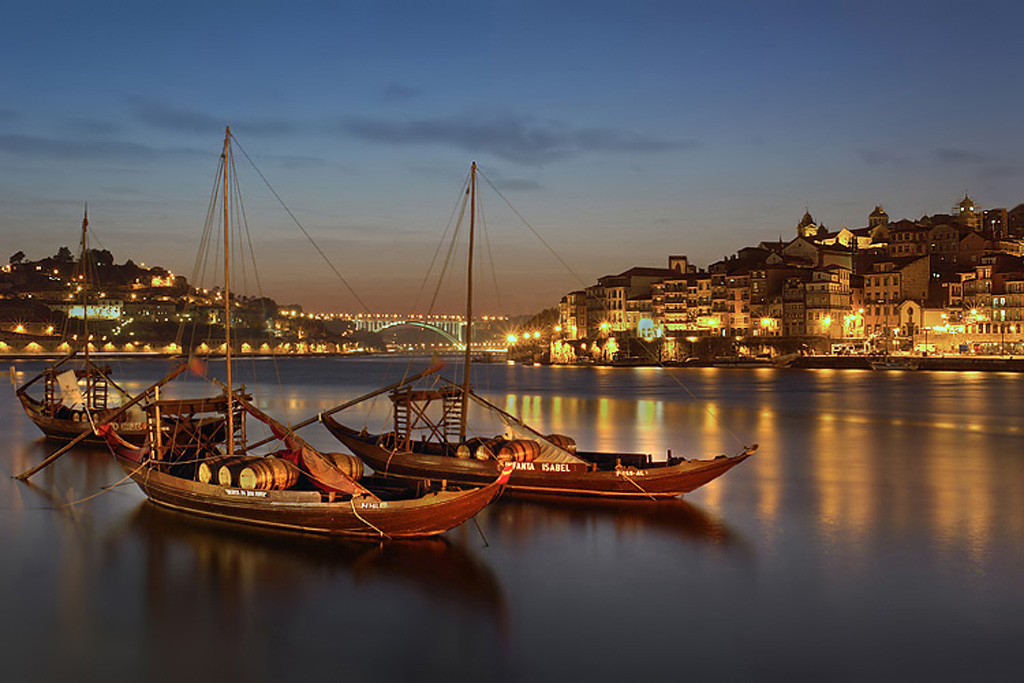 Traditional Barcos Rabelos with iron bridge by Eiffel’s pupil in the background, Oporto

Regional Information
In 1756 a royal charter defined the production region for Port wine in Douro, becoming the world’s third region to have a formal demarcation, preceded only by Chianti in 1716 and Tokaj-Hegylia in Hungary in 1730. The Douro has Portugal’s highest classification as a Denominacao de Origem Controlada (DOC), and although known primarily for Port production, the area produces non-fortified wines as well.

Around 50 miles east of the city of Oporto are the three Douro sub-regions of Cima Corgo, Baixa Corgo and Douro Superior. The vineyards are dramatic and ultra-scenic, terraced on steep granite and schist-ladened hillsides overlooking the Douro River.

The westernmost Baxio Corgo is the smallest region and due to its proximity to the Atlantic ocean it gets the most rainfall. As a result is the most fertile and abundant tending to produce the lighter wines like ruby and tawny ports. This area is responsible for almost 50% of all Port made.

Up river is the Cima Corgo (Cima means top, or summit) surrounding the town of Pinhão. Here, where rainfall is significantly less – about 28 inches a year – is where most of the high quality tawny, LBV, and Vintage port is made. Surrounding the town of Pinhão, are most of the famous wine growing properties or quintas. This region accounts for around 36% of the Port produced.

The last region is the largest of the three sub-regions, the Douro Superior which extends to the Spanish border. Here is the most arid and the least developed. Only about 13% of all port is produced here. This is a region to watch, as it will be interesting to see how it progresses.

Varietals
A large number of grape varieties are grown in the Douro region, most of them local Portuguese grapes. The top varieties for Port are the Touriga Nacional, Touriga Francesca, Tinta Barocca, Tinta Roriz (also known as Tempranillo), Tinta Cao and Tinta Amarela. For white Port Gouveio (which is likely Verdelho), Malvasia Fina and Viosinho are the main varietals. The vines roots grow very deep down through the schist fissures to find water in natural reservoirs, and are usually harvested between September 15th and October 15th.

Styles of Port
According to the Institute of Douro and Port Wines (IVDP) Port can be divided into two major categories (Ruby or Tawny) according to the manner by which they are aged (bottle-aged or cask-aged).

Ruby Style: These are all bottle-aged indicating a shorter time aging in cask or tank and then the majority of maturing in the bottle. The winemaker generally aims to maintain the fruit and strength of a young wine. This is the type of wine that you will find in the following categories:

Basic Ruby Port: This simple, young, non-vintage style is aged in wood for about two to three years before release. If labeled Reserve or Special Reserve, the wine has usually aged about six years.

Vintage Character Port: Premium Ruby blended from higher-quality wines of several vintages and matured in wood for about five years.

Crusted or Crusting Port: The best non-vintage Ruby Port, a blend of high quality vintages from two or more years, aged up to four years in cask and at least three years in bottle. Like Vintage Port, it throws a deposit or crust, hence the name.

Late-Bottled Vintage Port (LBV): Made in lighter years from a single year, bottled four to six years in wood after harvest. Designed to be full-bodied like a vintage port style but tends to be somewhat lighter and consumed much earlier because of the late bottling process.

Vintage Port: By law must be bottled within two years of the vintage, from the best grapes of a single harvest. This is a very dense and heady style, and without the extended cask-aging to integrate tannins, ten to twenty years of aging is recommended before Vintage Port is ready to enjoy. Vintage Port should always be decanted because of the formation of sediment. 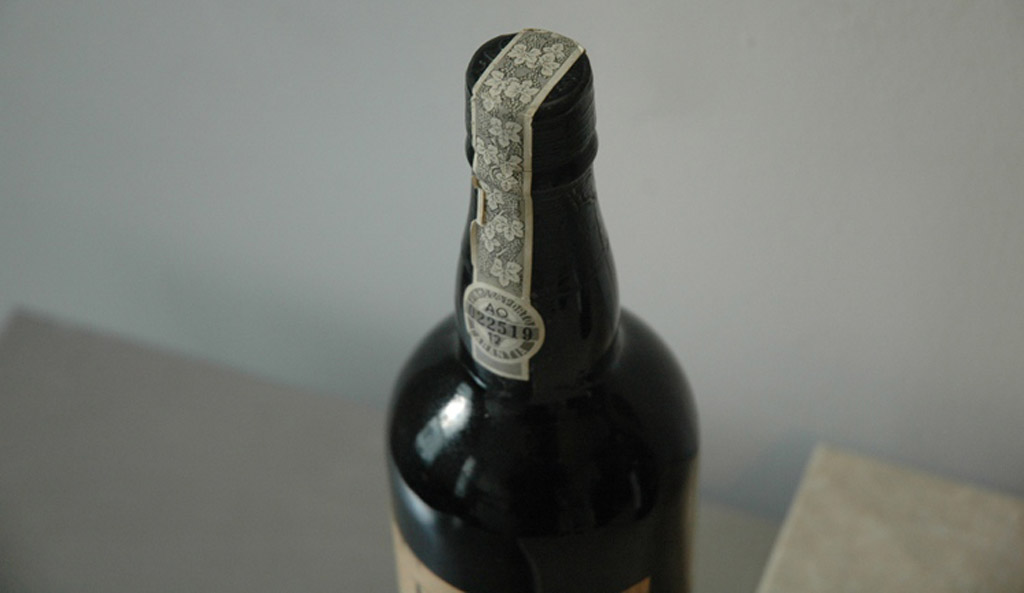 Tawny Style: These are cask-aged indicating aging in wooden casks or barrels then bottled relatively shortly before release at the point they are ready to be enjoyed. These tend to be slightly less sweet with a lighter, nuttier style and color—hence the name of Tawny for the amber tone that frames the wine. A great style as they are more versatile with food, and usually have a fine and silky feel. This type of wine you will find in the following categories:

Basic Tawny: The most versatile of the Tawny styles, which are blends aged usually at least three years in wood, up to many years depending on the aim of the winemaker. Tawnies have a very fine texture and style that can be served as an aperitif, during and after dinner with a much wider range of cuisine than other Ports.
Aged Tawny: (10, 20, 30 and 40 years old) Blends that are racked over a period of ten, twenty or more years where the oldest 30 to 40 year old Tawnies will show a character somewhat like liqueur. A voluptuous style with an added range of nuances such as coffee, spices and caramel due to the extended cask aging.

Single-Quinta Tawny Port: From a single quinta (estate) vineyard, and can be a blend with an indicated age or Vintage-dated.

Aside from these styles, there is a very small amount of white and rosé Port produced, commonly used as a mixer in cocktails or alone as an aperitif. These are made dry, off-dry and sweet and they are recommended to be served slightly chilled. There are very few uncommon age-distinguished or vintage white Ports, which when aged can take on a color that is similar to the lightest Tawny. 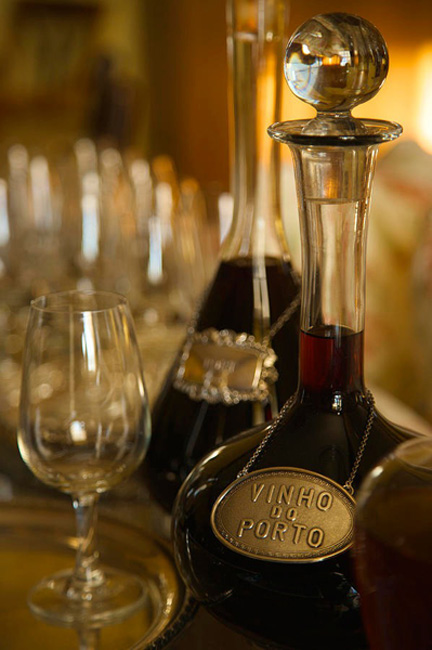 Vintage port should always be decanted, so for pointers see our blog post on how to decant here.

The ideal Port glass is slightly smaller than a typical white wine glass and holds about 5 or 6 ounces with a tulip or tapered shape that is neither too narrow nor too wide. As with other wines, do not fill the glass more than 1/3 full.

Depending on the style of Port and your personal tastes, there are many food pairing options—from classic to innovative and many in-between. For some pairing ideas, see here.

When you enjoy authentic DOC Port from Portugal, you are experiencing one of the world’s classic and unequaled wines! Cheers!

Sip your spirits and cure your cold, but I will take Port that will cure all things, even a bad character. For thee was never a Port drinker who lacked friends to speak for him.
William Makepeace Thackery, English novelist, (1811-1863)